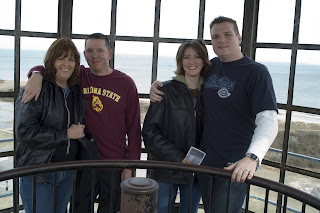 The photo is in Virginia Beach, VA. My aunt Karen, cousin Corey, me and Guy. My two aunties were in town visiting Corey where he is stationed in the army. Aunt Madelynn was in a conference most of the time. I think almost everyone in the whole family has tagged along with aunt Mady to all her conferences. The yearly national Game and Fish conference is the favorite as they have lots of activities for the tag alongs and go cool places. Anyway, we decided to go at the same time. Virginia Beach is so wonderful! We had a lot of fun. The aunties were teaching Guy how to play poker. He is a big fan of Blackjack, but we were playing the regular poker card games with some spare change. Aunt Karen had loads of change with her just for a poker occasion. Corey is living in the barracks so the aunties were kind enough to let us share their hotel room. We’d travel with them anytime! And we’re looking forward to the next time we can.

My mom emailed me today to let me know that uncle Lance isn’t doing so well. Aunt Karen was very worried about him the last time we talked a couple of weeks ago. My mom’s comments were very grim. He has lost 30 pounds, has more trouble with his walking/motor skills, and is also thinking he is speaking clearly but the words are coming out garbled sometimes. I’m wishing right now I had tried harder to actually talk to them both over the last few weeks. Several times I have called both the home and her work but not left a voice mail when they were not available.

The OB coordinator called from my doctors office. She said the doctor is referring me to a perinatologist (better then an OB for prenatal care) for my 18 week u/s because it is twins! Wooo hooo! They are known to have much better u/s equipment and sometimes will use a 3D machine which is really really cool. Guy has reiterated it is ok for us to find out the sex because I really really want to. So hopefully we’ll know in about 3 weeks. We also have a set date for our trip to Phoenix. My mom and good friend Melissa are going to throw a babies shower on 1/12/07. So for any Phoenix peeps put that date down in your calendar. Lock it it! Because it is coming up so quickly I have started to register already. But the whole not sure of the sex is holding me back. I’m so not a fan of yellow stuff and you can only handle so much green. Blue is OK for girls and boys, but if we get a girl then I want some girly stuff too. What a whiner huh? lol

Yesterday the 15th was our 5th anniversary. I forgot as usual and Guy remembered. He is such a great husband! We ended up going to Cracker Barrel for dinner because it was close. We generally do not do much for our birthdays and anniversaries. Some people ask us all the time how we have travelled so much the first years of our marriage. Well, not giving each other gifts for birthdays and anniversaries is one way we cut corners to travel. Since we both love to travel so much it suits us perfectly.