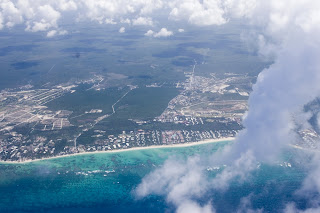 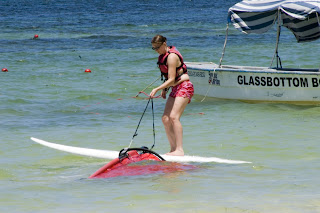 This first photo is a photo of Punta Cana, Dominican Republic from the airplane as we left. Almost everything there was perfect, except for the food. It was mostly edible, but warmer then it should have been. Guy got the old issue people get in some countries. He still refers to it as Poopa Cana. lol We went there the summer before last for a long weekend. It was one of the cheapest trips ever! If we had gone to a bit more pricey of a place the food would probably have been better and still been a really cheap trip so we recommend it to everyone. And the country could certainly use the money. It has inspired me to do two things in life. I’m now over my fear of scuba diving after getting on one of those underwater scooters with a big bubble over your head. The other is to get some great upper body strength and learn how to (uggg the name is escaping me, but the other photo is of me trying) ride one of those surf boards with a sail things. It was the most frustrating experience ever. My upper body strength was not enough to lift the sale out of the water with all the water on it. But I’m determined to try again and still would love to learn to surf. Not sure how that will work with contacts and all. I can’t see without them. And with them in the seawater makes them blurry for a second causing me to rub them and sometimes the impact with seawater will cause them to roll or pop out. lol. It all sounds like impossible dreams to me. Laser surgery is certainly appealing. Both my aunts had it and loved it. The last Optometrist I saw said there really is no need for me to get the surgery as even being the worst contact wearer he ever saw my eyes are in fantastic shape. How’s that for a back handed compliment. I’m the worst because I wear the 1 week contacts that can be left in for about 3-6 months without ever removing them. Well, sometimes once if they get a bit dry on me for a day. He actually switched me to a new brand. These are the best yet. They have been in for a full 6 months with no break.
Well, now onto the holidays on off the weird ramblings. Tawni and Sam came to stay with us for the four days. It was very nice to have them. I certainly don’t envy them the working out of the first year of marriage kinks and a pregnant lady on top of it. Tawni is doing well except for her diet. When someones only vegetables are french fries (not even mashed or baked potatoes) and breakfast cereal there are definitely some vitamins & minerals missing in the body. No wonder she is soooooo tired and pooped all the time. We had roast with mashed potatoes, green beans, salad, rolls and some delicious gravy. Sam was giving me a hard time about how I was planning on cooking the roast (when there was 3 hours till eating he asked why I didn’t cook it all day) so I invited him to cook it. He declined. And it was my first roast so I was probably more prickly then I should have been considering I wasn’t even sure how it would be cooked. Well, even with the silly roast still partially frozen it came out wonderfully tasty if a tad overdone for me. Guy was in hog heaven with a well done roast and the young marrieds just ate it. Of course, they said it was good when asked.
Tawni and I both pre registered at Babies R Us on Black Friday. We had a great time shopping with no crowds and a nice sit down lunch at Olive Garden. I was able to get quite a bit of prego clothes for only $70. Yeah, more choices now and enough to last thru a week. Tawni purchased a few smelly things at Bath and Body Works. Tomorrow my friend Melissa and I will go finish out the registry except for the majority of the clothes. December 6th is coming quickly! Hopefully those little chickens cooperate and show the goods so we can know what to expect and pick out the rest of the non neutral registry.
I have finally gained a pound! And my tummy seems to have grown a full inch over the long weekend. Only 20-30more to gain, and that’s with counting my little bit of chub weight before getting pg being transitioned to belly(10-15 lbs). lol It doesn’t even seem possible to gain that much. Believe me. I have been eating a lot for the last two months and it still isn’t packing on. Today I had the most yummy pizza for lunch. My buddy Melissa B. and an old work buddy Michael met up at an Italian Restaurant.
For the super sad news. Both uncle Lance and uncle Clifford are not in good shape. Lance has been in the hospital and had some more scans done. They said the cancer is spreading and the time left is very short. Especially after having been estimated at a year and it is only 2 months later we are all very devastated! Clifford was more recently diagnosed and the final tests are in. They are only going to treat for pain management and the cancer is in a lot of his body making it impossible to treat. We went from having time and hope to imminent loss. I think about them often and hope and pray the time left is as pain free and meaningful as possible for them especially. Uncle Lance has no belief in God or an afterlife so I’m hoping he feels the love and guidance of the Holy Ghost as he gets closer to passing. And that he will not feel despair and hopelessness.