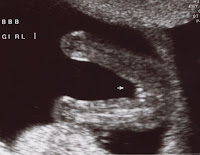 As many of you already know, today was the big day (or at least we hoped so). The little ones decided to co-operate, and boy did they. It all began with me first off advising the ultrasonographer that we did not yet know the sex, and that we wanted to know (I was not even sure we could find out to be honest with it only being 16 weeks). She immediately said no problem. went right to baby B (the higher one), and whalla its a girl. As you can see in the picture to the right. Certainly isn’t a boy. At this point i got a little nervous thinking about the White curse (is the other one a girl too). 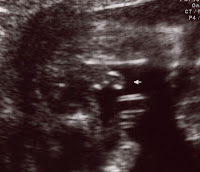 She automatically moved onto baby A, as my heart was pounding told her that the baby might be as stubborn as Mum and Dad, and just after we spoke those words whalla again. As you can see in this picture, the arrow doesn’t lie. It surely is a boy. We were so excited, Shannon and I high five’d each other. Now both of our dreams have come true, a true “TWOFUR”, a two for the price of one. Now if with our fertility problems we can no longer have 1 more, at least we have one of each. From the sounds of the reception as we called practically everyone who has a number store to our phones, everyone else is equally as excited.
Well the rest of the ultrasound for me was pretty much a bore, measuring bones, checking valves, looking for vital organs. Well i just wasn’t that interested, even though i am comforted knowing that bot

h babies are fine. The only thing we could not see was baby boys lips to check for cleft pallet. But doc says we can check next time. I did perk up a little when we were looking at the hands and out of nowhere the boy told us in a not so nice way to go away. He had his hand out with only 1 finger showing. We did not get a picture of it (good thing). After giving his Uncle Jamie a what for he then switched fingers and told us that he was number 1 again, but this time as if he had a huge foam finger on his hand. You can see a full body shot of the boy to the left.
Also you can see a full body shot of the girl. to the right. 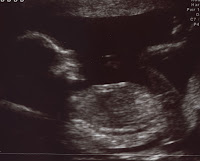 We are both excited and thank everyone for your thoughts and prayers, we cant wait to see the little guys, and show them that they are our number one’s, and two’s!
Dad to be!
Whiteguy
P.S. Not bad for my first blog, wouldn’t you say?