Here’s an oldie from the log ride at Disney World. I love it! We can be soooo goofy sometimes. 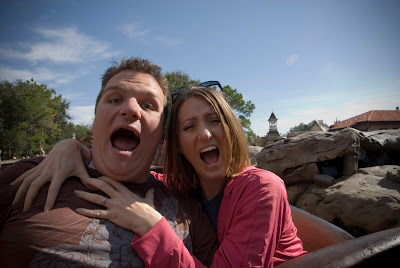 The first fruit went over just as I expected… They loved it! The ‘I won’ is because we just scored some fabulous local apples from Heidi that are the both sweet and tart (like me lol 🙂 and two good sized pumpkins from the hay ride. One is a large white one with a thicker and tastier meat, and the other is a funny shaped normal orange pumpkin. I think it looks like a child’s toy from olden days. A top. Tomorrow they will get their first pumpkin which means I have to cut them both up for the freezer and the next few days food. I really need to get an upright freezer for when we get good deals like this. Why only an upright? Chest freezers swallow your food making it impossible to really see or access what you have. I also scored a new child’s bike seat from Buttons & Bows in Garner!!! I had sold just enough stuff to get it. The main thing we sold was the swing we bought the babies which they had nothing but disdain for. Only one more bike seat to find then we can take up biking again!!! I can’t wait. It has now been just over a year since we tried it when I was 6 weeks pregnant. That sure didn’t work. My down below muscles were all doing the super stretch to accommodate the twins so exercise during pregnancy was not possible for me despite my grand ideas.

We may actually have found a rhythm and routine! How cool would that be after 6 months?? Guy is extra fabulous and all week has fed the kids when he got home from work about 5 am. So here goes for the current routine break down. I’ll start from the official waking:

Some days I can keep them together and some days they get ‘off’ each others time.

Madison has finally officially found her feet. She is also roaming around the crib and turning on/off her own Ocean Wonders crib entertainer like Blake. Blake has officially found his winkie last night during his bath. He kept trying to get it again but fell just short of reaching it most ‘Bam Bam’ like swings he took at it. lol He is certainly living up to his new nick name. Madison is definitely grown into the 18 month sleepers this week. Guy thinks I have them in tooo baggy of clothes, but I’m telling you they fit pretty darn good. Blake has also really grown out of the few 9 month sleepers he was in. I kept thinking ‘we need girl clothes, we need girl clothes’ that I didn’t add up how many sleepers Blake has in the 18 month size. Luckily he does have 1 and about 3 12 month ones. The 12 month one he had on last night looked about 2 inches too short in both the arms and legs this morning. We’ll see how they come out on the giant kids scale next week at their 6 month appointment. Madison is still about an inch taller then Blake. She is also losing her cancer patient look with the hair coming in better with only a few patchy places left. She is also starting to talk a lot instead of a little especially at the end of a bottle. Blake is now pooing at least 3 times a day. What a stinker!

There are more things they are doing, but it is time for their morning apples!! Yum yum.