Today I went out on my brand new rollerblades. I can see the future, but today was pretty traumatic. First it was really hard to get up the slight hills of the neighborhood. Second I was having a time trying to stop and get Moose to sit when a car came up. About the same time the car came up the rear so did a car from the the front. THEN a pesky squirrel we see on most of our walks came into site. Moose took off after it and for once I couldn’t control him as I was freely being pulled with him! So I let go to save the babies and I from being dragged away. The squirrel took off across the street (normally he stays to one side by a tree) and Moose darted in front of the patiently waiting car. I flagged the two cars by me, and called to Moose to come back. He did after about 2 minutes of calling him. The squirrel was safely up a tree by then. We continued on. About 6 houses later a very large sheppard comes at us barking ferociously. Moose again tears off this time right at the big scary dog. Moose thinks all dogs want to be his friend. I turned the stroller away from the dogs direction and muttered a bad word repeatedly. It must be a sign that I need to do my daily prayers and reading that I didn’t think to pray. Anyway, another dog shows up as Moose and the dog meet up. The dog starts getting him on the ground and is trying to bite his neck. His owner finally shows up and gets him off of Moose. The dog didn’t actually break skin, but I think Moose is bruised. We all headed back home at this point with no more thought of continuing the outing. Guy was out fixing up the front yard when we were coming up the road and took a few photos of us. Here they are. 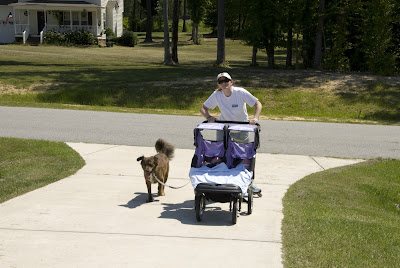 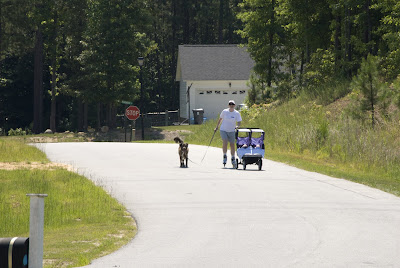 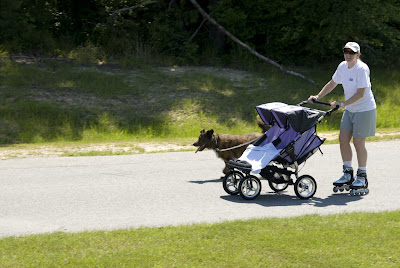