Skip to content
We went to Virginia Beach, VA to see Tawni and Sam (and Corey) this weekend. We left 1/2 a day early and were able to surprise Tawni at her ultra sound appointment. She was very surprised! On the way there we only had to stop for 40 minutes to feed Blake and Madison, and we fed them again as soon as we arrived at the Navy hospital to surprise Tawni and Sam. Tawni was given a baby shower on Saturday we attended. I actually won one of the shower games! Total shocker as I never win them. It was a timed game to see who could write down the most baby items. Being a new mom helped. The babies were a hit at the shower. All of the ladies were very nice too.
Mom got us a room at the Westin which was very nice. The linens were all super comfy and upscale. The shower had a double head. It didn’t smell or feel like a typical hotel room. Guy had us all laughing when we were talking about mom having to be in the same room with us during the night feedings. She has sleep apnea requiring a breathing machine at night. He was mocking how she sounds like Darth Vader when she talks with it on by pretending she was talking to the babies. “Madison this is your grandmother” and other comments like that.
Tawni and Sam were fighting most of the weekend. Take away their fighting and the weekend was nice. The fighting was very emotionally draining though. I am more tired today then I was after the first few days after the babies birth.
Today was a great first mothers day! Tawni and Sam picked up one of the best bagel sandwiches I’ve ever had for breakfast. We took photos today of our new family. The drive back home was nice (other then the car sick part from being in the way back of the Envoy). We st oped in Rocky Mount at an old school diner for a great lunch. There were flowers waiting on our front porch from the wonderful White family! I got a great nap this afternoon. Both babies breastfed for the dinnertime feeding (they have been hit or miss with mostly miss since the advent of Thrush two weeks ago). It has been nice hanging out with mom for her last night with us.
These are the first state line photos for Blake and Madison. Guy and I have been taking photos with state lines since we got married. It was just starting to drizzle when we were taking these photos. 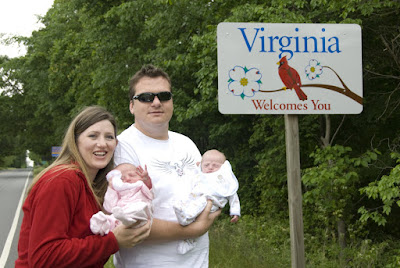 Madison was pooing for the first photo which is why I am laughing. For the second photo her poo was starting to squish out the side when we were walking to the NC sign which is why she is being held by the armpits! 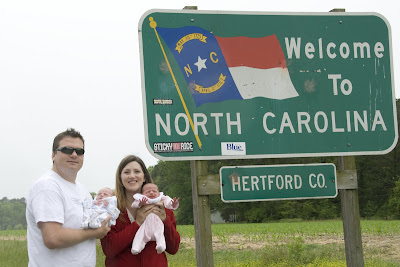 Here is Tawni being surprised by us. Her shirt says, “I’m not fat, I’m knocked up!” 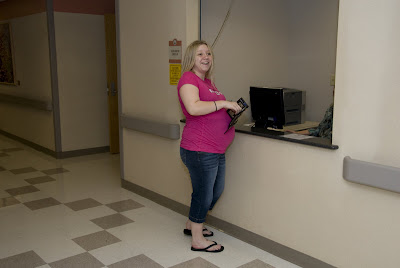 Tawni is holding Madison and Sam behind her has Blake. 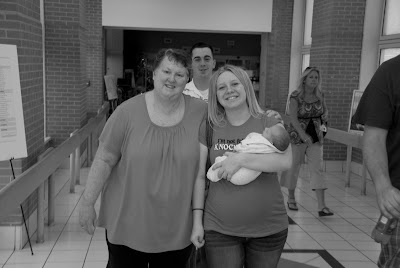 Madison looking like she is in a coffin while sleeping. 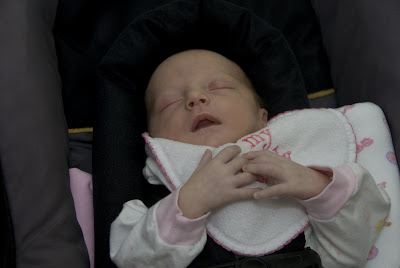 Little Blake. He has his uncle Jamie’s skin color! lol 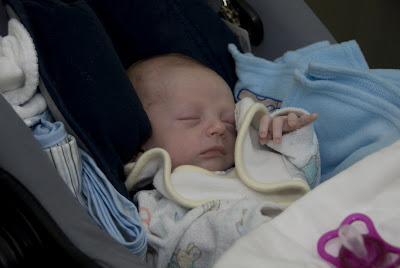 Guy with the kids at Cici’s pizza buffet. Cheap and OK food. 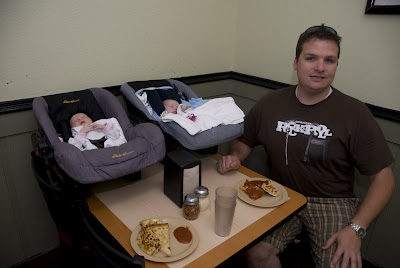 Mom with Blake and Madison in their first ‘real’ outfits. They both look like Steve Urkle or Ed Grimley with their super high waisted pants! 🙂 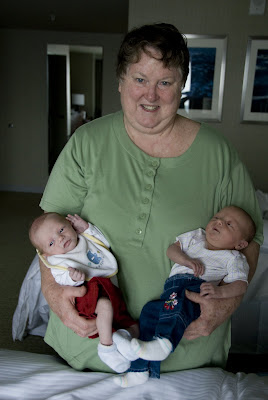 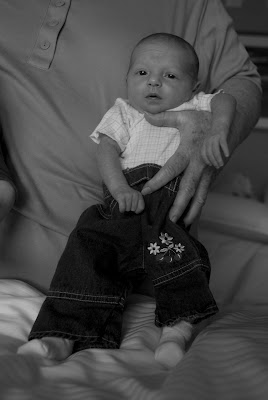 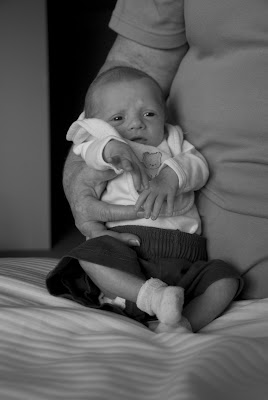 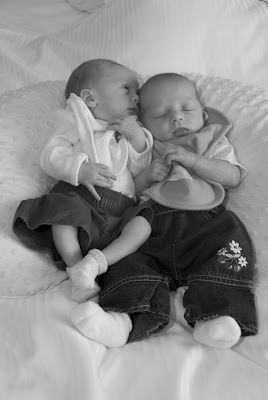 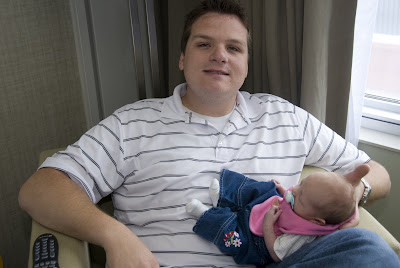